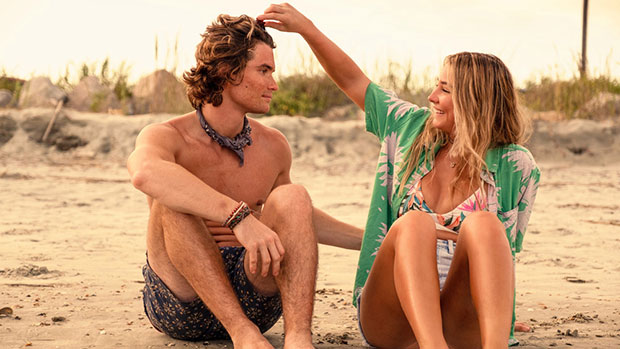 Ready to live that Pogue life again? The first trailer for ‘Outer Banks’ season 2 dropped on June 9, and it is INTENSE. Plus, Netflix revealed when season 2 will be released.

It’s time to head back to OBX. Outer Banks season 2 will make its highly-anticipated debut on July 30. The first trailer gave fans a glimpse at what’s ahead, and the stakes have never been higher. John B. and Sarah are on the run, while Kiara, J.J., and Pope are back home thinking that their friends are dead.

Outer Banks became a massive quarantine hit when the first season dropped in April 2020. The show was renewed for a second season in July 2020 and filming quickly got underway a few months later. The cast and crew managed to film safely throughout the COVID-19 pandemic.

The first photos of season 2 showed John B. and Sarah on the run after surviving a tropical storm that destroyed their boat. At the end of season 1, they ended up on a ship headed for the Bahamas, which is where Sarah’s dad took the gold John B. and his friends discovered. Back in OBX, Sarah’s family is mourning her after thinking she died in the storm.

Summer is also coming to an end. Kiara, Pope, and J.J. are headed back to school. But that doesn’t mean they’re not going to have many adventures. In one photo, J.J. and Kiara can be seen making a run for it. Meanwhile, we’ll be getting more backstory into Pope’s family life in season 2.

“Season 2 is going to test our crew like never before. We’ve turned up the dial on everything fans loved about season one – more mystery, more romance, and higher stakes. It’s a full-throttle, action-packed adventure and these photos offer a glimpse into the next chapter for our Pogues. All we can say for now is buckle up, it’s going to be a wild ride,” creators and executive producers Jonas Pate, Josh Pate, and Shannon Burke said in a statement.